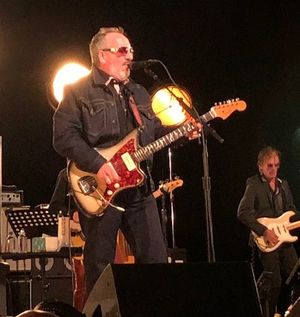 The last time I saw live music in person was March 7, 2020. The promise of a masked and vaxxed audience in a well-ventilated venue lured me back to see old favorites Elvis Costello & The Imposters in Charlotte’s Cesar Pelli designed Belk Theatre. What a way to poke my head out of the lockdown-shell: beautiful modern opera house venue and the promise of a super-charged Costello, whose cancer scare seems to have infused him with a heightened creative near compulsion.

I was the first one in the hall and the ushers were chatty with me. No opener, no intermission they tell me. 600 on the main floor, 450 in the balconies. Ushers patrolled the hall to make sure people kept their masks on. There were scarcely any reminders needed in an older and devoted crowd.

Costello played voraciously, like he'd just gotten out of jail. Energetic, playful. Purposeful. In good voice. Pete Thomas was an absolute MONSTER on the drums--really great sound for him tonight. Steve Nieve was spectacular as usual, especially on the unexpected request for Get Happy!!'s ‘Motel Matches.’ (I see this has been added to subsequent show sets). Elvis asked the 3 regulars if they were up for it and off they went. The keys were magnificent as ever, Nieve reveling in the old classic. Newcomer Charlie Sexton played along as on-the-job training, it seems.

Sexton, whose dreamy Chet Baker looks were all over record shops promo posters in the 80s was along for this tour, having pinched for Steve Nieve on a few early dates of the tour. Evidently he has spent my consciousness interregnum in Dylan’s band becoming an intuitive and creative guitarist gunslinger. I wouldn’t be mad if he became a fixture in the Imposters. A promo photo from EC labelled “The Imposters” hit social media early in the week--not sure if we are getting a teaser for something more permanent. A little of the old Jake Riviera huckster magic lingering? Anyway, Steve Nieve had been holed up in France "the Victor Laszlo of rock n roll" as EC said, unable to get his letters of transit, and now they were five on this tour.

The band is a lethal weapon--and reminded me of a high-strung but utterly responsive show horse--watching for EC's hand signs and audibles as they turned on a dime. Peak performers at peak performance. Both loose and tight-as-Spanx. My view of Davey was mostly blocked by a close and great view of EC. I did see (and hear) he had the upright out at a point. LOTS of new material, and killer renditions of Hey Clockface tunes. Bliss.

I took a few scribble-in-the-dark notes. The version of ‘Everyday I Write the Book' was a slowed-down R & B dance number--more Chi Lites and less Temptations to my ears. New song ‘Penelope Ha’penny’ was an escapee from Get Happy!! (Davey is a lovely bass player, but a Bruce Thomas unexpected rollicking, ever-changing bass line would be a welcome addition here. Yes, I know it sounds like I can’t get over the ex, but Spanish Model only reminds me how adore a BT bassline). Rubber Soul-Revolver era Beatles also came through at points. It’s already a favorite. Man, I can hardly wait to hear this with Kitten and Brianna!

‘Uncomplicated’ interspersed with ‘Shotgun’ is the sort of encyclopedic-musical-brain playful reference we want from EC. Charlie Sexton put on his cowboy tooled-leather-saddle patterned Tele for 'Country Darkness,' which was perfect, He and Davey chimed in on backing vocals, Steve joining in from time to time. It was a big but not crowded sound.

There was a running side drama between EC and his guitar tech, who only sometimes seemed to have the guitar ready at the right time, at least not often enough for EC’s liking. He began 'Watching the Detectives' with his big hollow body, switching mid-song to the Jazzmaster. At the show at Anthem, he had guitar pedal drama. tinyurl.com/zubbeastly  He rolled through both times OK, but mo’ shows, mo’ problems.

After the impromptu aforementioned ‘Motel Matches,” the band attacked ‘Tonight The Bottle Let Me Down,’ the Merle Haggard honky tonk barn burner. I think the last time I heard this played live with this band was at the Grand Ol’ Opry on the Almost Blue, Almost ‘82 tour! Charlie launched in like a true Nashville Cat and this was an exuberant shit-kicker of a romp. A pleased and surprised EC exclaimed “Setlist? What the FUCK is that!”

A new ‘Brilliant Mistake’ arrangement seemed informed by the wider-America: it had a Latin American, Samba-esque approach, with Pete trading the sticks for mallets. Very slinky and super-cool. The Spanish Model and Senastian Krys collaborations may have opened EC’s unsated musical appetites south of the US border. Maybe we have South to look forward to. He slid into ‘Boulevard of Broken Dreams,’ using lots of Dusty-Springfield-style hand flourishes to conduct the band mid-song. He often had Charlie and Steve trade solos--key solo and then a guitar solo. That was new and welcome. It didn’t feel excessive and was quite cool.

There was a new arrangement for ‘(I Don’t Want To Go To) Chelsea’ and the band, including Charlie were entirely fused with the song. It was transcendent as all five were just merged. And then they morphed into a new song, called, I think, ‘Magnificent Hurt.’ Wow.

They played straight through, no breaks, no lengthy stories that allowed the band to go out and smoke a butt. He played an energetic “Farewell, OK’ (the 2020 streamed release) and said goodnight. But they just stayed and played. So much better than the encore game we usually have to play with artists.

With the reimagining (Spanish Model) and remastering of This Year’s Model at least half a dozen songs from the album were included in the set, but it didn’t feel particularly like a TYM-centered show. The EC Wiki setlist is here if you want the complete grocery list: http://www.elviscostello.info/wiki/index.php/Concert_2021-10-20_Charlotte

What a fantastic show. EC has hit his SIXTH decade playing live and he has remained fresh, vital, inventive and driven. The new songs are strong. Two albums are slated for 2022, one with Burt Bacharach and the other I hope will feature ‘Penelope’ and the other new-to-us songs.* I am not sure how, but they keep making it fresh.