What Is It About Panel Shows and the Brits? 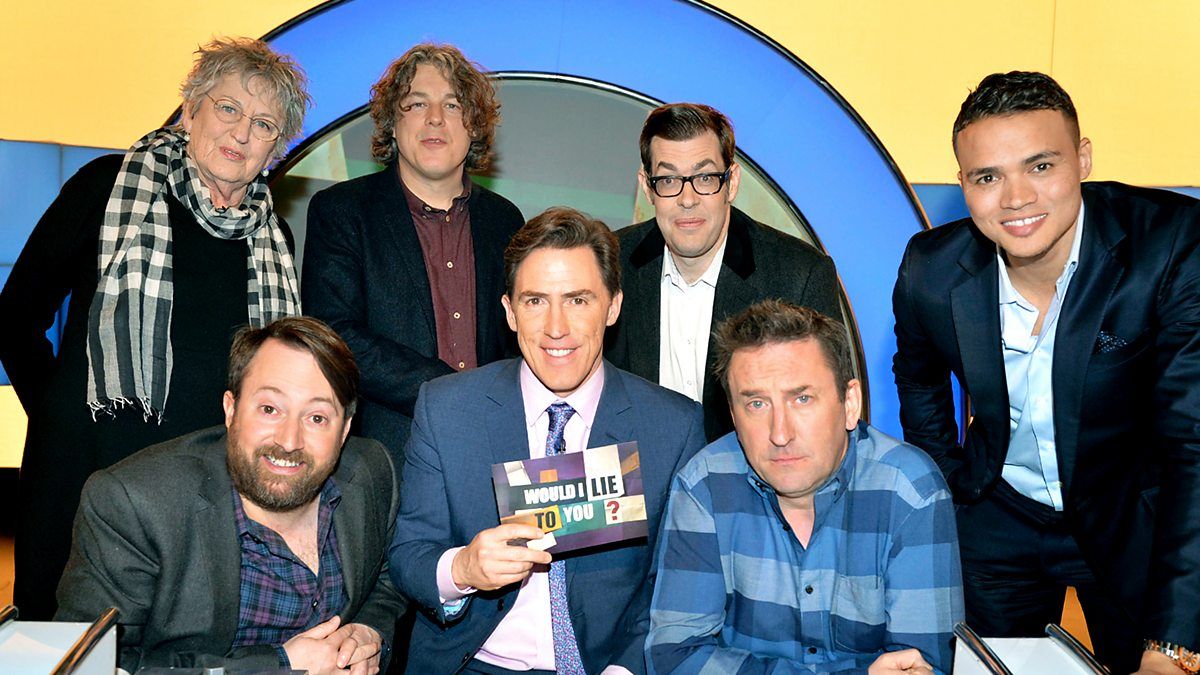 Enjoying my BritBox subscription inevitably has led to poking around the suggested shows. When I was a little kid, the post-nightly news slot was filled with American panel shows What’s My Line? and I’ve Got A Secret. These featured panelists whose careers on Broadway, publishing, and film in the 30s and 40s gave them name recognition and poise on camera. This made them great choices for these frequent forays into our homes. Kitty Carlisle and Arlene Francis, people in my young mind known only for being on TV, were typical of the Dinner at 8, 21 Club crowd that seemed to pop by the set for the fun of it, a sort of noblesse oblige for the entertainment of the common folk.

So I’d seen some panel shows on BBC America, so I figured they might be too “inside baseball” for a US viewer, but what the hey. I’ve watched enough Britcoms (see my review of Upstart Crow at zub.band.upstart) to maybe find my way through many of the “celebrities” and references on these shows. So I plunged into the panel zone.

BritBox has their current lineup in a “Panel Channel” collection, a great chance to sample the genre. So what have I noticed?

There is a panel class of performers that wander from panel set to panel set (is it the same studio for most of these? Do the sets wander in?) Panelists loosely fall into the following groups

The panel class has castes. On one show, they may have authority, like a host or permanent team captain, but they have no permanent clout on another show. Most participants have no rank and mosey from exposure to exposure on these shows, promoting their latest projects or their general panelist notoriety.

There are brainy panels, which ask substantive questions and high concept shows that have a goal that must be met by the end of that episode. Most have the pretense of a scoring system, ostensibly being built around a game. So what have I found?

BritBox calls it: a “clever comedy quiz show full of quirky facts, in which contestants are rewarded more if their answers are 'quite interesting.'”

Particulars: Each panelist has a gag buzzer for toss-up questions. This is a pretty shallow gag, and of course Alan is always the odd man out on the buzzer theme. Wrong answers are flashed on a huge screen while a blaring klaxon sounds. The producers have the likely wrong answer at the ready to flash boldly on the immense screen, but sometimes the panelists throw a real curveball. The obscure questions are aided by hints by the host and they meander to an answer eventually, It’s usually pretty genial, with Alan serving as the affable butt of the joke. Good fun. Each series features subjects from a letter of the alphabet. The last series on BritBox is R.

An episode from Series Q: here.

Level of British Culture Difficulty: If you drink Twinings tea, you should be alright.

My personal favorite: [Insert Name Here]. The premise is that host Sue presents a common first name, say Jane, and all the answers will be about persons named Jane or common variants, like Janet or Jeanette. The winning team selects the greatest Jane in history for the show’s Hall of Fame.

BritBox calls it: Comedy panel show about people with just one thing in common - they all have the same name.

Host:  Hosted by Sue Perkins of Bake-Off fame (Great British Baking Show as shown in the US), a gig she got after she and Mel were let go in the great Paul Hollywood purge of that show.

Regulars: Two permanent team captains, Josh Widdicombe and Richard Osmon (an impossibly tall fella who is a kind of line judge on Pointless).

Panelists: A rotating slate of two guest panelists for each team is featured each show.

Here’s a promo from the ‘Frank’ episode.

Level of British Culture Difficulty: You have seen every episode of Fawlty Towers.

Least favorite: Pointless  An impossibly arcane elimination scheme (some teams get a return despite being eliminated from a round, others go away forever) gathers teams of pals/relations/partners who play a sort of reverse Family Feud. I did not like it enough to bother to sort all that out.

BritBox calls it: The quiz show that rewards "pointless" knowledge. Contestants try to score as few points as possible by plumbing the depths of their general knowledge to come up with the answers no one else can think of.

Regulars: Richard Osmon is there “correcting the errors and providing the comedy.”

Panelists: None! Four pairs of connected teammates (spouses, neighbors, siblings, coworkers) compete to score the least in 3 rounds and then try to score nothing in the final round.

Particularities: The goal is to get the LOW score of a survey to a prompt, with the ultimate goal being scoring a correct answer that earned no survey responses, aka was pointless. For example, “Top 10 Charting Records With ‘Don’t’ in the Title.” And there are 2 rounds of 7 or 8 answers. The first partner gets one slate, and then the second gets another slate of yet more answers. Sheesh! So not a traditional panel show. And the prize money is dismal, like 1000 pounds--and I have never seen a winner, who must be pointless in the final round. This is more of a traditional game show, not a true panel show, even though BritBox includes it under this tab.

If you dare: here.

Good Fun: Would I Lie to You?

BritBox calls it: Comedy panel show where contestants have to bluff about their deepest secrets and the opposing team must decipher which ones are true.

Host: Rob Brydon (Of my beloved Gavin and Stacey fame as well as The Trip mock road docs with Steve Coogan)

Panelist: Two-a-side guests, including public intellectual Germaine Greer. Probably the most varied group of guest panelists of the panel shows.

Particulars: Home Truths (a panelist reads a story, sight unseen and must answer questions from the other team, who must judge whether the story is true, or a lie), This is My … (introducing a person with one team supplying each members’ story of how they know the person, the other team votes which story is true), and then another round of panelists telling stories that must be judged as true or false by the opposing team..

Is Germaine Green a cannibal fantasist? See for yourself.

Level of British Culture Difficulty: Can name 2 of the Queen’s corgis

BritBox says: Do you prefer ketchup or world peace? The theory of evolution or argyle socks? This irreverent and revealing comedy panel show addresses the oddest topics and then polls the public to see what they think.

Panelists: Team captains for 3-aside panels. Rob Beckett is the regular captain of one side, and a guest team captain serves on the opposing side.

Particularities: Jimmy Carr, an old-school stand-up, starts the show with a monologue somewhat related to the first survey. Lots of stand up punctuates the activities. It takes over nine minutes of riffing on Brexit before the first survey result is shown, the topic was something like “what are British people talking about this week?” This is not my particular cuppa. Is it yours? See.

Level of British Culture Difficulty: Can understand a “Northern” accent

Panel Show Mash-Up:  8 Out of 10 Cats Does Countdown BritBox may or may not have Countdown itself, but it DOES have this panel show cocktail.

BritBox says: the panel show is the perfect mashup of topical hit "8 Out of 10 Cats" and the cerebral words-and-number game "Countdown" as the anarchic comedians of the former take on the brainbox format of the latter.

Regulars: There are FOUR regular “staffers” for this show. The word whiz for the Boggle-like portion of the show is Susie Dent. The Vanna with the math skills of Archimedes is Rachel Riley. Comedian Joe Wilkinson is a dogsbody for gags and tasks. A self-promoting guest sits next to Susie and helps relay breaking news from the dictionary and delivers canned gags from their acts. Lots of C-list acts, including one guy who did the fake eyeballs lark.

Panelists: Two teams of two, Sean Lock and John Richardson each regularly sit on each side and are joined by another celebrity.

Particularities: Susie and Rachel are borrowed from regular Countdown. Each break is bookended by a word scramble for the audience to solve based on a naughty jumble. Rachel puts up the letters for the contestants’ Jumble word puzzle and then walks all through the math portion. Numbers drawn at random have to be added, subtracted, multiplied, and divided as gets closest to a randomly generated three digit number.

Most Promising: As Yet Untitled

BritBox says:  featuring an eclectic mix of A-list and up-and-coming faces, As Yet Untitled sits everyone round a small table for a discussion about ... well, anything.

Host: Alan Davies (pronounced the Welsh way as ‘Davis’) is a well-known face to British viewers. His “magician who solves crime” drama Jonathan Creek was in constant rotation on BBC America 20 years back.(Brit mystery shows always seem to have the strangest naming conventions for their main characters’ surnames).

Panelists: 3 guests join Alan around the table, changing each week.

Particulars: The last item of each show is to reflect on the conversation and come up with a title for the show they just shot.

Sample conversation here (Jon Ronson’s Them is a family favorite).

BritBox says: With his planet-sized brain, Dara O Briain hosts this fast paced, irreverent, and topical panel show in which two teams of comedians take satirical swipes at the news and world events.

Host: Dara O Briain, who evidently has a planet-sized brain.

Panelists: 5 guests join the 3-aside teams.

Particulars: Whose Line Is It Anyway? (the original Brit version was a blast) meets news satire. Smacks of try-hard humor. This is the most stand-up filled panel show of the lot. I did not like it enough to give it more of my time, but YMMV.

Try it here (even The Jam’s 'News of the World' theme doesn’t save it for me).

Level of British Culture Difficulty: For fans of the original British Whose Line Is It Anyway?

As a host of a podcast named ‘Singles Going Steady’ I’d be remiss to not mention Never Mind the Buzzcocks.

Hosts: Several over the 25+ seasons

Panelists: Team captains are joined by a pop star and a celebrity.

Try it: On YouTube; not on BritBox currently. This episode features British boy group Jedward and Charlie Higson (See the review of his show with Madness).

Level of British Culture Difficulty: You can tell the members of Jedward apart

Panel shows. We really have nothing like it anymore regularly in the US. Game shows are cheap to make and quick to shoot and have a toehold in the day, syndication, and network prime time schedules. Maybe there’s a corner of the multi-channels and multi-platformed golden age of TV that is making panel shows for the US, but a return to the celebrity panel show peopled by Broadway’s finest seems unlikely to come back soon. The Brits score a real spectrum of participants. I have enjoyed my exploration and look forward to new seasons being released.