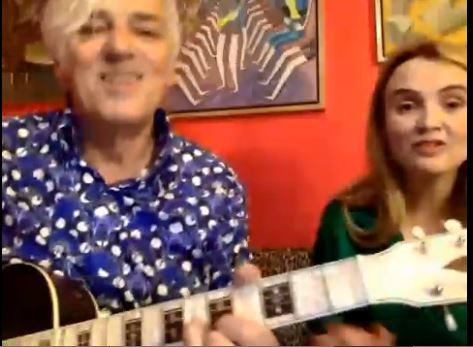 We love to blog about the shows, films, music, tv, books and even the occasional art exhibit we see. In the days of social distancing precautions, artists are moving their works to streaming platforms and Zub is going there with them.

This is the new normal, I suppose. Robyn and Emma were hosting a fundraiser for the East Nashville Community, where they live. This area was hit hard by tornadoes as well as, like all of us, the new pandemic. The idea now is that these online shows are the new (and maybe only) way for musicians to make any kind of money. So it’s even more impressive that Reg and Em were doing this as a fundraiser.

The platform they used was called StageIt (www.stageit.com). You log in, buy a ticket (very inexpensive) and have the option of ‘tipping’ the artist during the show. There is the obligatory ‘comment’ section where the punters can talk to each other and what not. Luckily you can full screen the show and block that noise out if you are distractible. The artist is responsible for staging the show.

When Em and Reg came on, they were completely charming. The show was from their home in East Nashville, on the sofa with paintings from Robyn’s dad on the wall behind them. The vibe was loose and comfortable, like you were in the living room, with the two of them playing songs, telling jokes, and just generally having a great time.

The eleven songs in the set featured two covers and nine Hitchcock originals, starting with ‘Light Blue Afternoon’ from his Tromso, Kaptein LP. The duo introduced their quarantine friends, Leonard (the flying fish), Jermaine (the female koala), and Perry (the lobster). Robyn was playing a Gibson Nick Lucas model acoustic that was overpowered a bit by their vocals, but hey, it’s a concert in a living room. ‘Glass Hotel’ was next, Emma cracking Robyn up with Leonard the flying fish. After the song, Emma complained about Robyn’s four cheese pizza recipe and there was a sense of British doom as they discussed the possibility that the tea kettle may be broken. At this point, their cat Ringo (the one with his own biplane) made a brief appearance.

Robyn switched to a less cool-but-better sounding Larrivee Guitar and was checking the time on an old fashioned round dial clock. They mentioned that anyone donating $100 or more got their choice of handwritten song lyrics by Robyn, and Emma pointed out that they had already raised $7000. He did ‘Sinister But She Was Happy’ from Moss Elixir and ‘Raymond Chandler Evening,’ from Element Of Light. He (and Emma) were in fine voice tonight. The banter between this couple was priceless, Emma telling Robyn “I’ve never known you as a comfortable person, ever” followed by comparisons of the two as “Goldie Hawn and Kurt Russell” or “Bette Midler and Lou Reed.” This ended with Robyn musing about Bette Midler replacing John Cale in the Velvets.

The duo killed it on ‘Virginia Woolf,’ one of the strongest songs from Robyn’s great recent LP Robyn Hitchcock, followed by an appearance by Perry the lobster. Emma took the lead on Neil Young’s ‘Motion Pictures,’ which was elegiac and very beautiful. Emma recommended Young’s  On The Beach as the “best Neil Young LP.” One song was cut short as Robyn thought their time was up, leading to a minor squabble where Emma told him to let her worry about the time...she got a 20 minute encore added. When asked how that was done, she replied “I pushed a button.” By this point, Quacky the plastic duck and Terence the trolleybus made an appearance, followed by a lovely version of ‘Queen Elvis.’

There was talk of the non-appearance of Tubby the cat, and after Robyn playing a tender ‘Madonna Of The Wasps’ we were treated to “The Earl of Tubbance.” Tubby is their one-eyed Scottish Fold and the cutest cat this side of his brother Ringo. A surprise song was ‘Television’  from Spooked, in which Quacky got some vocals in. These two ended it up with a verse and a chorus of Bob Dylan’s ‘Just Like A Woman,’ and just like that the concert was over.

Robyn and Emma are a charming and fun couple. The internet feed was not the greatest, the sound not perfect. Still, you can’t beat the experience of seeing your favorite artists in the comfort and intimacy of their, and your, homes. These two pulled it off wonderfully. Can’t wait for the next show!